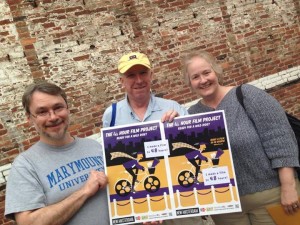 Posted at 14:26h in Featured, Media News by admin
0 Likes

When my friend Tim Flaherty came shopping for a location for his entry in the 2014 48-Hour Film Project,  I was intrigued and wanted to help him. He is a former President of TIVA, and I know him to be a rock solid television and industrial producer.  His co-leader was Ishu Krishna, another former TIVA Board member for whom I have a great deal of respect. They named their team CITRA/CVA Productions after their respective production companies (CITRA and CVA).  Together, they assembled 27 professionals, from talent to producers, writers, editors, and motion graphics.

I was happy to offer the use of my office as a set, for a chance to observe the process unfold.  Unfortunately, our new office was way too small for a set that would eventually include helicopter drone shots and human burials.  Nevertheless, I agreed to buy lunch for the cast and crew, in exchange for the right to blog about the process.

However, my problem was daunting.  As a transcription guy, my knowledge of video production is very limited.  How was I supposed to educate others about what I didn’t understand very well myself?  That turned out to be easily solved.  We decided to tell the story through the words of the participants themselves.

Here was my challenge to the CITRA/CVA Team.  Everyone who cared to do so would state the role that they played in production.  Why did they participate in the 48-hr FP, for no compensation, on the first nice weekend in spring?  How did they do their thing?  What special equipment, techniques, and acting skills did each bring to bear which would distinguish their work from the 95 other entries submitted at the DC 48-hr FP this year?  How did they function under pressure on a project with other people who were mostly strangers to each other?  What went particularly right, and also what went wrong?

My first request for blog submissions went out before the first screening.  Although our entry, The Ultimate Event, did not make it into the finals (called “Best of DC” in this area), I am sure our readers will find the participants’ comments particularly insightful.

First to respond to my request for insight was current TIVA Board member James Thompson, who served on the camera crew of The Ultimate Event.  His comments:

“The first shot after the Peter Roof Drone into the building was a mid-shot of our star.

“This was done on a slider loaned to the production from another TIVA member, we had a mid-shot with the television’s silhouette taking up the left side of frame. As the director – Rich Volin read lines from the script, we inched forward on a 50mm lens with 5 separate focal points for the dedicated 1st AC – Jyothi Sunkari to hit over the 6 foot move. So the random elements included pacing from a script read, the subject sitting up in frame, and the previously mentioned TV needing to exit frame, the 2nd AC – Tara Roberts took care of sliding the unit out as I moved through its space with the slider mount. The TV flicker was produced by the gaffer – Jorge Mera bouncing a 350 watt arri into 1/4 CTB gel and all of this took place after midnight (16 hours since we began).

“The crew was excellent to work with, moves were quick, complaints were absent, and even the on-set (Home owners) dog entering frame to sample a featured cake didn’t slow the project down.

“Many people have told me how much they like the flowers hitting the grave, this was done in 720p to get the Canon 7D to record 60 frames. To give credit, 1st AC – Jyothi Sunkari who is experienced with her own 7D rig did that shot, nice work.

“When Peter Roof’s drone got ready to shoot the end crane out, then entire camera department including myself stopped and just watched in awe as what appears to be a children’s toy (ok these units cost and the practiced skill that make the shots work, are far from child’s play) created a shot which little short of a 30 foot crane, build crew of 3 and duration of 30 minutes could want to achieve, made the end takes swift and could be repeated for best performance.

“Also based on a discussion with Director – Rich Volin, anyone watching the film understands it is a funeral, very easy to convince an audience but no one will ever find the tombstone!”

Reaction from the Wiz

The camera drone shot started the film off with stunning effect.  My first thought was to wonder whether someone actually rented a giant crane or a helicopter.  This establishing shot indicated the level of professionalism which was to follow.  Incidentally, the same camera drone and operator (Peter Roof) was the subject of a live demonstration at a TIVA meeting last summer.  The slider was featured at the same meeting.  Many of the cast and crew were solicited through TIVA.  Word Wizards is sure that other local organizations like WIFV and PGA have 48-hr FP teams out there that they are equally proud of.  Networking with other professionals pays off every time. “I can certainly attempt to comment on my experience from this past weekend, and about how cohesively we all worked together.

“I played Martha (my real name), Samantha’s assistant at the event planning company we represented in the film.  It was an insanely fun time.  The script was outrageous, the creative team was brilliant, and the crew were spit-shine professionals.  It’s true that the group worked very well together, many of us for the first time as a team, but there were also team members who HAD acted, or produced, together prior to this weekend.  I knew several crew members and actors from past projects myself, and although I had not met Tim Flaherty, the producer, before, he arranged a pre-production meeting at a watering hole in DC a couple of weeks prior to the big weekend where we all had a chance to get to know each other and bond.  By the time we met at Rich Volin’s house (the director) for the Big Event, we felt like a pretty close-knit family.  And for those of us who already knew each other well, it was an opportunity to lean on one another, while under pressure, to produce the best performance we could in a stressful situation.  For example, Tanya Davis (Samantha) and I have portrayed disaster victims almost every week for more than two years as we help adult students learn new skills under a government training contract, one of several role-playing jobs she and I have worked on together.  It was wonderful having this chance to do something different and challenging with Tanya, and my other fellow actors, during the 48 HFP last weekend.

“Why do we work long hours for no pay just to be a part of this competition?  I think it must be the joy of being a part of something very creative, seeing it come to life, and competing with your peers (the other film teams) in a friendly way that just makes you want to do this again next year.” Reaction of the Wiz

When I saw the shots of the three actresses in their business suits, I thought they were event planners from Madison Avenue. The use of seasoned professionals really came through for the production.   Some of the participants had worked tougher in the past. However, everyone knew their jobs, no matter if they were part of a team that had worked together before or not.

As to the question “why do you do it?” Martha’s answer could have come from any of the hundreds of thousands of people who have participated in 48-hr FP over the last thirteen years in hundreds of different cities around the world.  She did it for love of her craft, for “the joy of being part of something very creative.”

“I agree this looks like a very successful production.  I myself was only involved for a few hours, as a motion designer for a couple slates and the end credits, and honestly I have not seen the end product yet so I don’t know if they decided to scrap everything I did anyway… 😉 “From something of an outsider’s perspective, it seemed to me that what made this production work so well was that everyone knew what they were supposed to be doing, and everyone there was really dedicated to the task and the craft of creating the film.  I came in on Saturday evening, shortly after 8:00 pm, and the crew was working on their last few shots.  The media was being handled efficiently, and handed off to the editor, who had a clear sense from the director how the whole thing was being played, and was able to pass that on to me very clearly, so that I could start working on the graphics.  That allowed me to create something that worked, I think, the first time, rather than going through many revisions and slowing down the process.” “I come from a background in television and industrial production, so “filmmaking” as an exercise for cinema was a little foreign to me before I began doing 48 Hour films. I decided participating in a 48 Hour Film Project movie would be a great way to learn about creating art in this similar but decidedly different discipline.

“I met Ishu Krishna at a TIVA function in 2011 and asked if I could join her team.  She took me on as a producer, and we have now done four of these together.  My interest in coming back is to further skills and knowledge in production for cinema, to earn cinema credits and to meet and work with other professionals as a networking exercise. I find 48 Hour is a terrific venue to come in contact with other people you might wish to work with in the future.

“I try to put together a professional crew and have all important positions filled.  Many team leaders don’t bother with full camera departments, or ignore small but important roles like Continuity Director.  Lack of a proper crew leads to mistakes and oversights that the judges are going to notice.  Rich Volin and Ishu are also excellent screenwriters, and have this good chemistry working together.  Keeping them in charge of the writing team is paramount to a good script. Nick Gay as both an editor and graphics creator is also a core team member.  I enter this to win, so Team Citra/CVA goes all out!

“On top of everything else, the 48 Hour Film Project is just something fun to be part of.  The premise is a little goofy, and there is an “anything can happen” vibe to the whole weekend.  It’s something that you often talk about with your friends for the rest of the year.  You also learn to do something well under a time constraint, so it is a good learning exercise for everything else we do. ”