16 Jul AFI Docs – Behind The Scenes 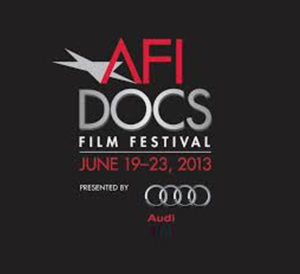 The “SilverDocs” film festival has become AFI Docs, and shook things up this year with a completely new format. With a luxurious new sponsor, Audi, and a substantial reworking of the festival organization, AFI Docs made a big impact in its first year. Instead of being concentrated in Silver Spring, this year the majority of events and screenings took place in downtown D.C. The big premiers took place at the Newseum, The National Portrait Gallery, The National Archives and The National Museum of American History. Secondary screenings and filmmaker interviews were later held at the AFI Silver Theater, the original location of SilverDocs. Many critics of the new format were concerned that having the festival so spread out would be too chaotic, and would lead to a drop in attendance. However, the festival was well attended and the critics were proven wrong. Furthermore, it added a bit more buzz to the festival since these films, which contain so many important issues, were playing right next to the highest halls of political power.

My role in the festival was acting as a media manager, which was not the most glamorous job, but still important. The AFI Docs tech crew had cameras and producers going around and getting different types of footage. This included man on the street interviews, footage from Q&A’s that preceded documentary screenings, and some personal interviews with directors. I was responsible for taking this footage from P2 cards, putting it on hard drives, organizing the footage so the editors could get to it quickly, and then dropping these drives off at AFI Theater where all the editing took place. Again, not the most exciting work but I did love working with the AFI Docs crew. Additionally, I got the chance to help edit a few of the festival trailers, one for the “best of” trailer and one for the movie Mistaken For Strangers.

The Spirit Of The Festival

Word Wizard Inc. has always been a huge fan of the festival because it focuses exclusively on documentaries. The diversity of people and topics represented by the festival is truly impressive. One film I had the pleasure of viewing was, Dragon Girls at the Newseum. The movie follows three women enrolled in the largest Kung Fu academy in China, and explores how they deal with their adolescence and the grueling training. I was really impressed by this film, because it shed light on a culture that I normally wouldn’t think about. There were many other documentaries that seemed especially interesting. One of which was Running From Crazy, a story about the family history of Ernest Hemingway and his granddaughter, actress Mariel Hemingway. I also hear lots of buzz about Gideon’s Army, which examines the importance of public defenders.