On June 30, 2016 at an event hosted by Interface Media Group, WIFV (Women in Film and Video) brought the fascinating animation portfolio of the NASA Goddard Space Flight Center’s Scientific Visualization Studio (SVS) and its director Dr. Horace Mitchell, to the attention of the local film and video production community.  The NASA-SVS Gallery of 400 videos and 6,200 visual images are free to anyone who wants to download and incorporate breath-taking scientific content, with the proper attribution to NASA of course! 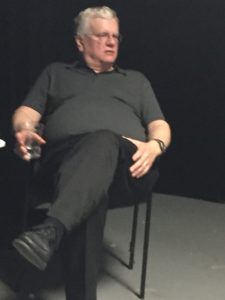 Dr. Mitchell, who has a Ph.D. in physics, developed an interest in visualizing his scientific computations.  Using a variety of in house custom developed software, he and the SVS team uses raw data to produce scientific visualizations which have wide appeal in popularizing NASA’s scientific endeavors to the world.  They translate the data from satellites and earth based observations into gorgeous representations worthy of the finest impressionist painters.  In fact one these data generated videos is actually called Van Gogh Sun: (watch it on You Tube).

Check out these colorful images formed from bites and bits of data worthy of the famous one eared Dutchman himself.

Another example of the NASA-SVS work which has gone viral (with over 300,000 viewings) is Perpetual Ocean which uses no audio narration at all, only ocean flow data and a software which in the erudite words of Dr. Mitchell, “drops digital particles into the flow fields” to produce graphic animation of ocean currents which translates esoteric earth science into spellbinding images.  Take a look, you won’t believe your eyes.   https://www.youtube.com/watch?v=WEe1bVjORN4 .

The SVS team, along with their partners in production at NASA Goddard, Conceptual Image Lab, Goddard Media Studios and NASA Hyper wall Productions, want you to take advantage of the work of thousands of NASA scientists to help spice up you productions for free.  A better use of taxpayer money for the advancement of “the Biz” is hard to imagine. Special thanks to award winning children’s animator Kristin Harris for organizing WIFVs animation round-table series.