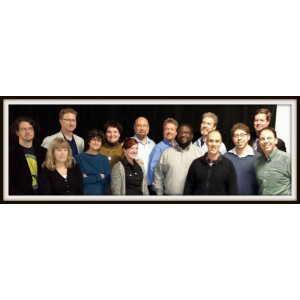 Following the successful TIVA presidency of Jerry Griffith with many innovations and a record membership, Brian Grundstrom now steps into Jerry’s shoes and takes over the reins. Formally Vice President of TIVA, Brian offers an insider’s view and super-charged ideas for growing Television Internet Video Association to the largest affiliation of video production professionals in the mid-Atlantic region. His fiery dedication and attention to detail will assure the association’s continued success.

New board members include: Jonathan Stein, head of the programming committee following the popular Jim Miller. Tara Garwood, secretary and head of the publications chair is taking over for Carl Randolph who is now the PEER Awards chair. New board member Bill Coughlan is serving as the current vice president while Todd Clark acts as the government liaison. TIVA veterans Lisa Laden, Rachel Targoff and newcomer  Arron Shirley are all very excited to be helping with the programming committee. Rachel also heads up the Peer Promise at the Peer Awards. And last but never least, Colin Sandy as the sponsorship chair to help build relations between TIVA and other Washington, D.C. organizations.

The Old with the New

Ten-year veteran Anne Schwab handles all volunteer activities, as well as the income and new memberships from events. She is often the photographer at meetings and spearheads events like the Christmas Party. Anne Hall continues as treasurer working with the accountants; Darryl Diamond continues as the TIVA webmaster; James Thompson as seminar leader. Finally Matt Harmelin acts as the social media master keeping TIVA current on channels like Twitter, Facebook and LinkedIn. The board looks forward to a year of excellent programming as well as a cooperative relationship with sponsors such as Word Wizards Inc, Docs In Progress, Duo Media Productions and Creative Management Services among others.

For more about TIVA board members, check out the official TIVA Website. http://www.tivadc.org/